Hello, my name is Charles and I’m here to review the newly released movie Scooby-Doo! & Batman: The Brave and the Bold.

In this movie, Batman Recruits Scooby Doo & the Gang to join the Justice League’s mystery-solving department known as the Mystery Analysts of Gotham. While there, they help solve an unsolved case from Batman’s past as well as fend off a rogue gallery of Batman’s greatest villains led by a new villain known as the Crimson Cloak.

In conclusion, this movie is without a doubt the best of both mystery-solving franchises. Last but not least, this movie was released January 9, 2018 on DVD. 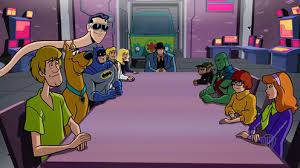