During my trip to Denver in July I learned a lot

1. How to be flexible with travel: We had to sit on the tarmac for 45mins because of wildfires near Denver.
2. How to be busy: My sister made sure I was busy everyday and got to ride the Georgetown loop railroad. It’s a nice ride but you have to go over a 75 ft. tall bridge called the Devils Gate Viaduct. Then you climb as well – you go from 8,000 to 9,000 ft above sea level.
3. How to deal with the unknown: One night when I was with my sister we had a power outage and dealt with some big thunderstorms.
So all in all it was a good trip. I suggest Denver to anyone who wants to see the mountains. 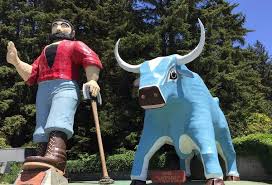 If there is one thing about California, it’s that it’s probably the American Capital of Attractions, Vacation Spots and Tourist Traps. They seem to have everything to see, the San Diego Zoo, Disneyland, Knott’s Berry Farm and that is not including the famous beaches and cities. Good Gravy, Cali, don’t hog all the tourists. You’re soon gonna make the 49 other states scrape the barrel to get some visitors.

Anyway, enough complaining, back to business. There is one particular Roadside Oddity in the Golden State in the town of Klamath in the Del Norte County that I find of great interest, a strange woodland known as “The Trees of Mystery.” Awesome Name, right?

The park, now claiming to be the oldest redwood nature attraction, first opened in 1931 by Carl Bruno probably hoping to expand the regions economy beyond logging (a bit ironic as we will later get to). It was originally a fishing camp but evolved into a roadside oddity/amusement park/natural preserve named “Wonderland Redwood Park” and later “Kingdom of Trees.” It got its current name in 1946 when, returning from military service, Ray Thompson bought out the park. His family has run the place since. The original attractions are various trees growing in unique and unusual ways. They include the…

Trust me, there are too many of them to talk about right now. We need to address the starring attraction of the Trees of Mystery: the Lord of Lumberjacks himself, in person, Paul Bunyan with Babe the Blue Ox! Standing at almost fifty feet with ax in hand, Paul waves as visitors come to visit his wooden wonderland. He can tell jokes and riddles, chew the fat with folks and predict the weather (if the trees are all bent in any direction, then its windy!) Could this be due to a voice actor in a hidden room? Nah, I’m pretty sure that it’s Paul for real. The Lumberjack Giant lumbered in when Ray first got ahold of the property. He was first made out of paper-maché but fell apart within a year due to rain. I mean seriously! Did anyone not see that coming? Luckily smarter heads prevailed and Paul has been refitted with more sturdy material. It’s not completely Bunyan without Babe, of course, as the Big Blue Beef was added in 1951. He would snort and blow smoke out of his nostrils when he first came but has been on better behavior now due to scaring the kiddies.

These, of course, are not the only attractions available. There is the Trail of Tall Tales full of chainsaw carved wooden sculptures. Many of them tell stories of Paul and his lumber camp, but some are original creations. You can take a ride on the Sky Trail gondola. If you’re a nature lover you can take a walk in the Wilderness Trail for a walk in the beauty and majesty of the woods for the sake of it, nothing special just a normal forest. At the gift shop there is the six roomed End of the Trail Museum, containing a lifetime of collected Native American artifacts from across the continental United States. The museum is free of charge for all visitors to the Trees of Mystery.

Nearby is the charming, “vintage,” Motel Trees. These 23 rooms are all individually forest themed with details and beauty. Adjacent to it is the Forest Cafe for a hearty good ‘ole fashion bite to eat. Here you can have your dinner under the Klamath River or under the sky of the Redwoods…. well, OK, its individually themed dining rooms, but they are amazing. I hope they serve up a good stack of pancakes. 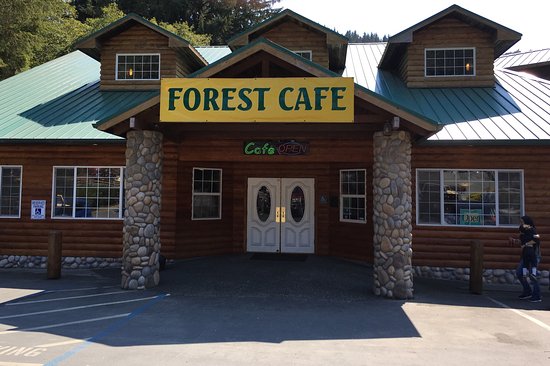 Oh man, this is too cool for me to hold in. Years ago as a kid, I remember visiting the Trees of Mystery. I can still remember seeing Paul Bunyan. For quite some time after that I was enthusiastic with tall tales especially with the mythos of the lumberjack giant. You can look up more information on the website here at https://www.treesofmystery.net. But if you have seen the film Axe Giant pleas don’t bring it up. I doubt Paul is very flattered at the portrayal of him in that movie.

Keri used to be very shy, but SEEDs for Autism has helped her build confidence and improve her social skills. At SEEDs, Keri enjoys creating beautiful, hand-crafted items using ceramics and wood and she is also a regular contributor to this blog. Here, Keri shares experiences from her wonderful trip to Hawaii. (Ed.)

Hello my name is Keri I went to Hawaii for 6 days. It was really green and tropical. I went to one Island it was called Oahu. I chose that Island because it had a lot of activities to do. I went to a couple of different places. I went snorkeling at Hanauma Bay and went on a helicopter ride too. On the helicopter ride we flew over the island. We flew over the Dole plantation and the world’s largest maze, too. We also saw a waterfall on the helicopter ride. Also, we went to the famous Waikiki beach. Pearl Harbor was neat and we saw the Arizona Memorial. We went to the Cemetery of the Pacific were World War 2 veterans were buried.  We went to see the state capitol too. Also, we went to a luau and a dinner cruise too. For the dinner cruise we went on a Friday because if you go on a Friday you would see Fireworks where they set them off at the Hilton Hawaiian Village.  It was really beautiful scenery and breathtaking beaches.

My name is Keri and I like to travel. There are a lot of things that I like about traveling. I like to see the different lands, also hiking, walking the mountains, or going to the beach. I also like to read books on traveling. Travel books show the different places you can see like the top 10 scenery sites or places to visit. Travel books have a lot of interesting information, but it does depend on the book. They show famous things and landmarks. You can provide feedback when you read travel books to add your own comments. They are very interesting too. I like to sightsee in new places and eat different kinds of ethnic food. I like to look at everything in sight.  You can learn a lot about different places when you go and see them for yourself. Walking, hiking and backpacking are good forms of exercise you can do while traveling.

It is very nice when we go too. Flagstaff is about not that far from Phoenix. You can get there by airplane or drive.  It’s probably nice to drive so you can stop in Sedona and get a bit to eat. It is great to be relaxed.  Then in Sedona you can take the back roads to Flagstaff, it doesn’t take long.

In conclusion, you can learn a lot about travel and seeing different places like the mountains and the beach.

Roaming in the Fremont neighborhood of Seattle, Washington, by the Puget Sound inlet on the Pacific near Canada, is a great and terrible creature of legend. Terrorizing the good people under the George Washington Memorial Bridge, the monster grabs cars and devours the drivers and other pedestrians by swallowing them whole by the handful in…No, I am not talking about Bigfoot! That big ape is famous enough already. This monstrosity is the one and only Fremont Troll.

OK, Now that I got your attention, I can start this article properly. Also known as the “Troll Under the Bridge,” this mixed media statue, made of steel rebar, wire and concrete, lurched his way under the bridge and into the hearts of locals and visitors, on Halloween of 1990. The Scandinavian behemoth interactive with visitors and has often been decorated with chalk drawings and even a Santa hat during the holidays. You may also climb up and down the Troll and punch him in his good eye made from a hubcap. In his mighty left hand is a real Volkswagen Beetle covered in cement. The volks was at one point also a time capsule for some Elvis merchandise as well but the collection was removed due to vandals.

The statues history started with a contest sponsored by the Fremont Arts Council in 1990 to rehabilitate the area under the bridge, which was turning into an unofficial garbage dump and spot for drug dealing. Inspired by that famous fairy-tale “The Three Billy Goats Gruff” and built by for different, talented artists together, this big lug ended up crawling under to scare away the drug dealers from Seattle’s most colorful neighborhood. (In fact, Fremont could be labeled as an Unusual Place in its own right, but I would have to much to write about however, so look it up on your own). Luckily all goats have nothing to fear from him as he is already stone.

.
The Troll continues to be an icon of Fremont. He appeared in the movie, “10 Things I Hate About You,” a smaller version of him on wheels road in the 2007 Red Bull Soapbox Race in Seattle and every October 31 the people of Fremont celebrate the Troll’s birthday with a special “Trollaween” celebration. He has appeared in numerous merchandise including t-shirts, postcards and even his own chia pet! He can be found under his bridge for visitors at all hours between North 34th and North 36th at Aurora Ave. North, renamed in 2005 to Troll Ave. North. He also has a Facebook account but he doesn’t seem to do any Internet trolling. I wonder where he keeps his giant laptop.